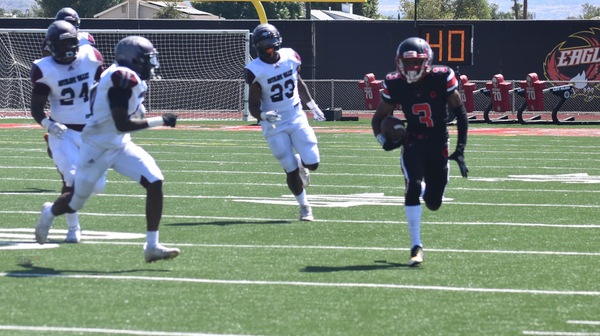 The Mt. San Jacinto College football team will open their 2022 season on Saturday when they travel to Ramona High School to take on Riverside City College. Kickoff, originally set for noon, has been moved to 6 p.m. because of the extreme heat.

The Eagles are coming off their first ever American Division title and their first conference championship since 1999. The team posted a 9-1 record on the field last year and won the Hemet Sportsman’s Club American Championship Bowl 17-6 over Antelope Valley.

Last year the Eagles were set to host RCC in the season opener, but COVID caused the cancelation of that game. Riverside reached the 2021 State Championship game, coming up just short of the title as they lost to City College of San Francisco, 22-19.

The Eagles return a host of talent from last year’s team and have added a strong group of newcomers around them. On offense, Robert Coleman returns at quarterback after sharing time last season with Devan Freedland. Coleman played in all 10 of MSJC’s games, completing 89 of 135 passes for 1.461 yards. He threw 17 TD passes and was only intercepted 3 times. He also was a threat on the ground as he rushed for 463 yards on 66 attempts and added 7 more touchdowns.

Also returning to strengthen the ground game is Jaylen Magee. Magee rushed for 334 yards on just 46 carries last year for an average of 7.3 yards per carry. Taliq Brown anchors a solid group of wideouts as he comes back for his sophomore year after scoring 7 TDs as a freshman, making 38 catches for 512 yards.

The defense will be anchored by 2019 American Division Defensive Player of the Year Steven Bradshaw. Bradshaw had a standout 2019 season as he recorded a state-best 108 total tackles with 4 sacks and 4 interceptions. He will be joined by 2021 standout linebacker Nathan Ortiz, who had 50 tackles during his freshman season. He had a pair of sacks and 8 tackles for loss. Naisir Morrow had 35 tackles and 2 interceptions and returns kicks for the Eagles.

The Eagles will also be on the road Sept. 10 when they travel to Lancaster to take on Antelope Valley. MSJC’s home opener at Carl Quandt Stadium in San Jacinto will be Sept. 17, when they host Moorpark at 1 p.m.

The Eagles were scheduled to move to their new home stadium on the Menifee campus, but construction delays have pushed that completion date back to January.

AUS v SA: We needed a bit of luck in the end, says Aaron Finch – The Indian Express

Under 16 boys’ singles reaches round of 32