Kriti Sanon and Varun Dhawan will reunite in the upcoming horror-comedy Bhediya. It is helmed by Amar Kaushik. The duo has previously worked together in the 2015 film Dilwale which also starred Shah Rukh Khan and Kajol in the lead. Meanwhile,  Bhediya is scheduled to release on 25 November 2022. A few hours back, Kriti and Varun were spotted in Mumbai’s studio where they were shooting a song for their upcoming film Bhediya. Now, the Pati Patni Aur Woh actress shared then-vs-now pictures with Varun on her social media.

Re-sharing a picture that was shared by Kriti’s fan club, she took to her Instagram story on Friday and captioned it: “I’ve become chubby Sanon while you’ve become Varun The Man,” alongside a laughing and heart smiley emoji. Meanwhile, Bhediya is the third installment in Dinesh Vijan’s horror-comedy universe. Varun and Kriti’s Bhediya is the third film in producer Dinesh Vijan’s horror-comedy universe. Amar Kaushik, who also helmed the 2018 blockbuster movie Stree, is directing the film. The second in the series was Roohi, Janhvi Kapoor-Rajkummar Rao’s film. 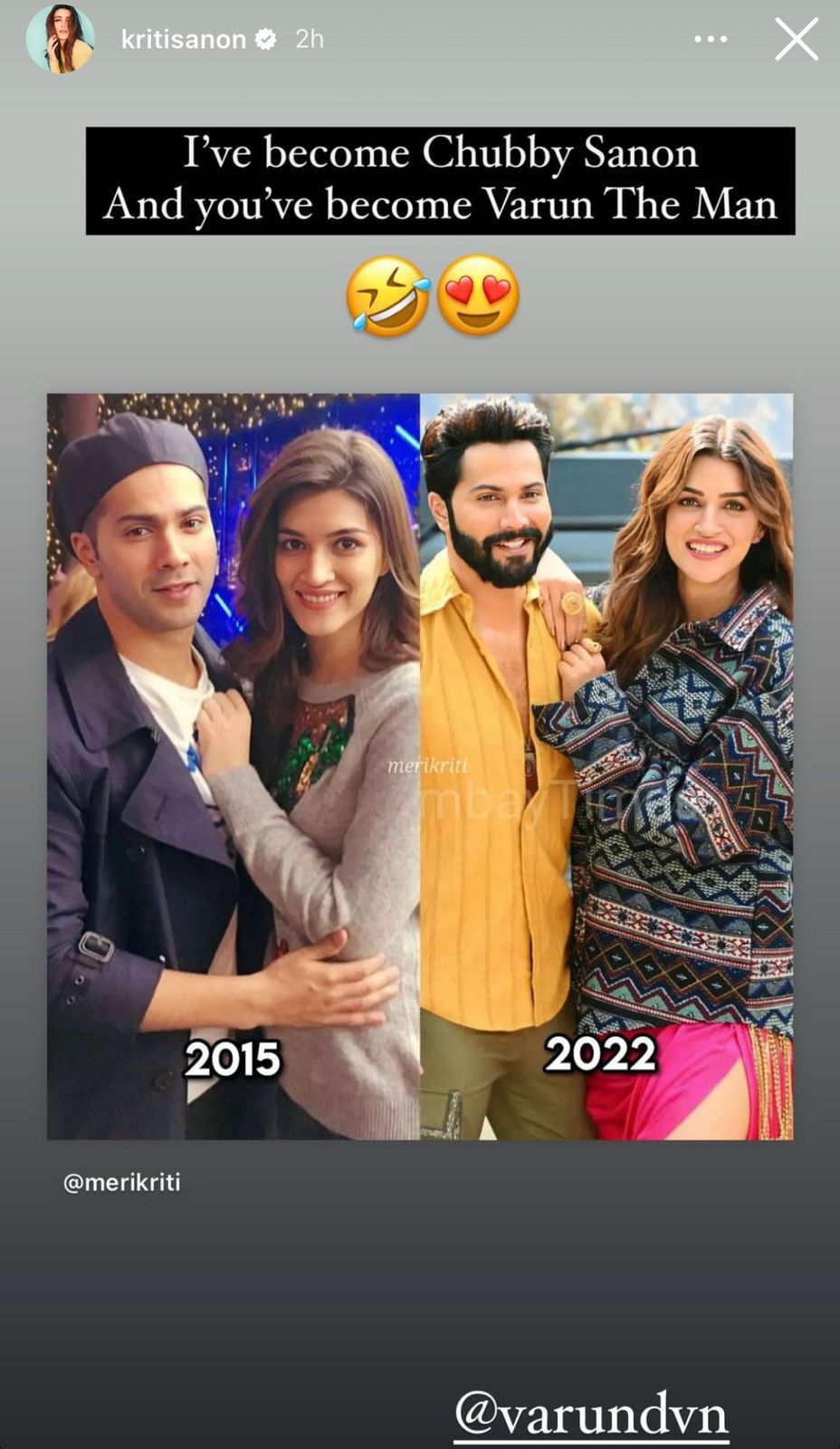 Bhediya has been shot in the picturesque location of Arunachal Pradesh and the second schedule was in Mumbai. Apart from Kriti, Varun, Abhishek Banerjee, and Deepak Dobriyal are a part of the movie. A major announcement regarding the teaser release date of their movie is expected to be out soon.

Apart from Bhediya, Kriti will feature next in Shehzada co-starring Kartik Aaryan, which is scheduled for theatrical release on 10 February 2023. It is the Hindi remake of the 2020 Telugu film Ala Vaikunthapurramuloo. She also has Adipurush with Prabhas, Saif Ali Khan, and Sunny Singh, which is scheduled to release on 12 January 2023. Varun, on the other hand, will be seen next in Bawaal alongside Janhvi Kapoor. It is helmed by Nitesh Tiwari, who is best known for his 2019 released movie, Chhichhore.

ALSO READ: Varun Dhawan and Kriti Sanon goof around as they step out during Bhediya song shoot; PICS

Scooter Braun Is Keeping His Private Jet Amid Divorce

“Reading Is Like Eating Brussels Sprouts For Me” [Video]