Like clockwork, every grand final week these days features the same debate: whether all players in a premiership team’s squad, rather than just the selected 22 (or since the addition of the medical sub, 23), should receive a premiership medal.

Naturally, as is the case with the best debates, both sides have plenty of merit.

Every grand final features heartbreak stories aplenty, players forced to the sidelines through injury or form, having done plenty to ensure their team got their chance to shine on the big day.

Think Ben McGlynn in 2012, playing 21 of 22 home-and-away games for Sydney, reduced to tears on the bench after pinging a hamstring in the qualifying final, and only watching on as the Swans secured premiership glory.

Or Nathan Jones just last year, a stalwart of Melbourne during their darkest years who found himself surplus to requirements by the time the Demons had finally wrested themselves out of the muck to claim a first flag in 57 years.

(Incidentally, the greatest travesty of 2021 was the medi-sub’s introduction being timed perfectly to allow a player like Jones being carried to a flag, and then not being available for it.)

Or this year’s example, Swan Logan McDonald, dropped for the big one after a quiet first two finals. Should Sydney defeat Geelong, he’ll become the first player dropped from a premiership team since Billy Hartung for Hawthorn in 2015.

Or perhaps the most famous of all, Western Bulldogs captain Robert Murphy, who ruptured his ACL early in 2016 and witnessed a team moulded in his image surge to one of the game’s most memorable flags… without him.

There are many ways that these players can be honoured by their clubs and the game for their contribution to their team’s victorious seasons.

But to do so by handing them premiership medals would devalue the medals themselves, serve as an insignificant gesture to those thus rewarded, and fly in the face of AFL’s traditions and culture.

No single heartbreak story is worth sacrificing all that. 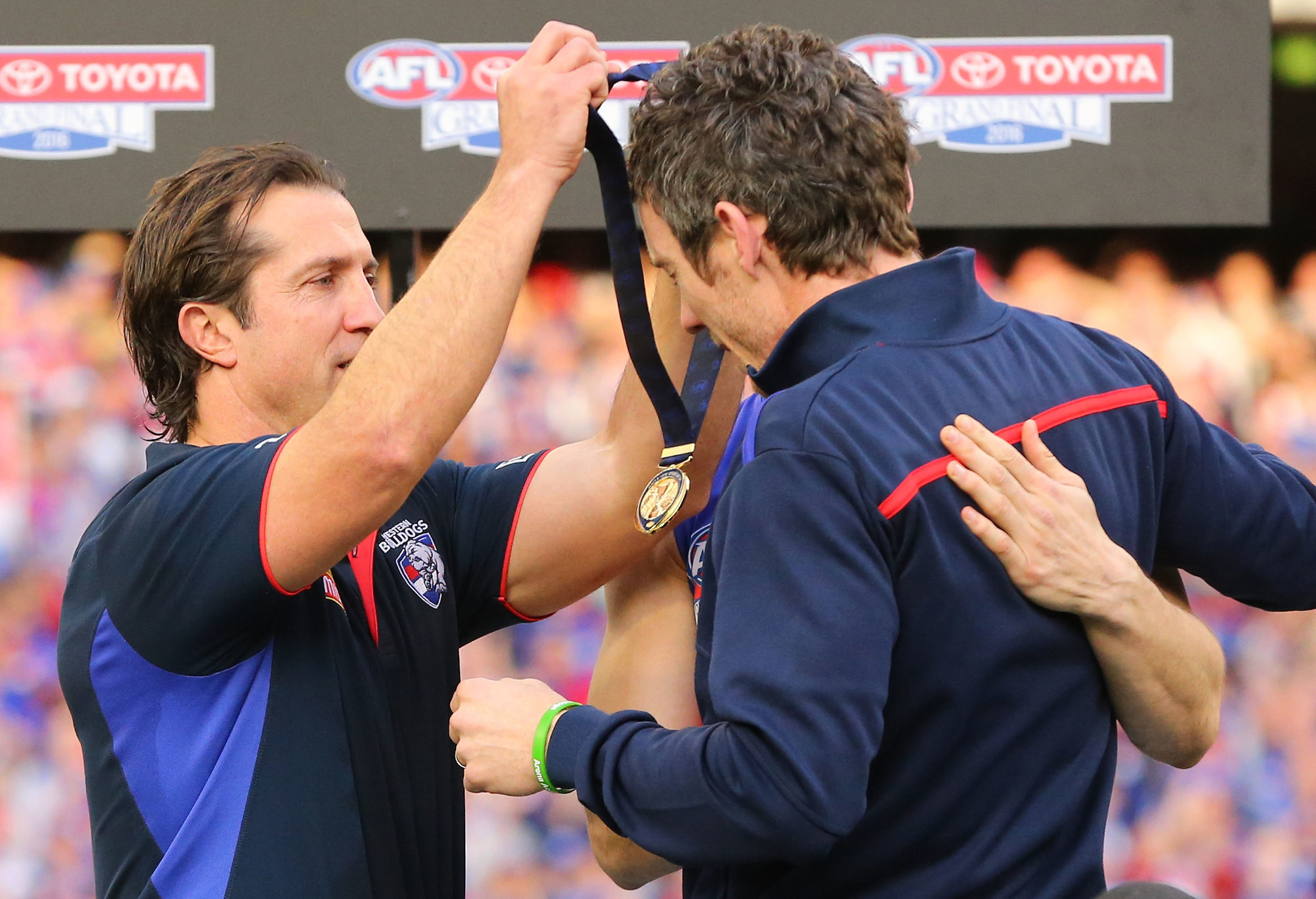 Whether you subscribe to the view of giving all 40-45 players in a team’s squad a premiership medal, a la the NBA, or introducing a threshold – say, one game for the season, or 10 games, or a final – to somewhat limit the amount of medals minted, problems arise. It’s purely old-school supply and demand.

Premiership medals are coveted precisely because they are so rare – only 22 (or now 23) are handed out. And the heartbreak stories of McGlynn, or Jones, Murphy, or perhaps McDonald this year only add to their prestige.

It’s not always fair – sport seldom is. But neither is the fact that champions of the game from Nick Riewoldt to Matthew Pavlich, from Brad Johnson to Robbie Flower, never got one either.

I’m adamant a situation where a player like Geelong’s Shannon Neale, who played just two matches for the year and one as medi-sub – no disrespect intended to him, by the way, this could be any of a score of players across the Cats and Swans – could finish this season with a premiership medal would make them essentially meaningless.

Some will say that every player on the list who played a game in a premiership season contributed to that ultimate success – but surely that’s only in a Butterfly Effect sense where if you change one thing the entire universe shifts.

A five-disposal Round 13 game in a loss to Sydney from Jarrod Brander in 2018, for instance, had no impact on West Coast going on to win the flag outside of the broadest possible terms. Certainly not an equal amount to Dom Sheed, or Jeremy McGovern, or Luke Shuey, or any of the 22 Eagles out on the MCG who actually did win it all.

I’d also argue the awarding of a premiership medal to players watching their teammates win it for them would offer little consolation or significance.

The medal, while worth plenty, has its greatest value as a memento. It’s a permanent reminder of the feeling of elation at the final siren of the last game of the season, and knowing you’ve overcome any number of obstacles and all the odds to win the premiership for your team.

Look at any of these victorious players’ faces at full time of the last 77 grand finals and tell me any of them are thinking ‘You beauty, there’s a medal coming my way!’

Using Murphy as an example again, surely no medal could compensate for being reduced to a spectator for what would have been the most important game of his career in 2016. Surely no mere trinket could fill that void.

As it happens, Murphy was still honoured for his contributions to that Bulldogs team: Luke Beveridge handing over his Jock McHale Medal to his injured captain was one of recent football’s most poignant moments.

Murphy, as it happens, handed the medal the next day. I think he understood that it wasn’t the medal that really mattered: it was the feeling of being included.

“In that single moment of generosity, Bevo brought me into the sunshine,” Murphy later wrote in his autobiography, Leather Soul.

“The excruciating double act of hiding my obvious emotional pain and celebrating my club’s greatest triumph was soothed. I didn’t have to pretend anymore. Honesty sets you free, and that’s what my coach did for me that day.”

I’m not sure Logan McDonald, as another example, would see a premiership medal as anything other than a permanent reminder of his undoubted devastation at being dropped for the most important game of his life, should the Swans get up.

The reality is that winning a premiership is about more than just a medal. It’s about moments like Cameron Ling in 2011, sealing a third flag and first as captain with the game-icing goal with his final kick before retirement.

It’s about the crowd’s roar filling your ears when your name is called to receive that medal, and getting the chance to cry out ‘That’s what I’m talking aboooooout!’ like Shane Crawford in 2008.

They might have a premiership medal, but for those not selected, the extra stuff that gives it its meaning, its significance, just doesn’t compare.

A prime example, from over in the NRL, is Nathan Hindmarsh, a Parramatta Eels champion who played in their grand final loss to the Melbourne Storm in 2009.

When asked in 2010, following revelations the Storm had been rorting the salary cap and would have the premierships stripped, whether the Eels should be awarded a retroactive premiership, and his teammates retroactive rings, he answered:

Who is going to give us that feeling of winning when we are up by six when the siren goes?

Who is going to give us that feeling of pride, relief or satisfaction, or give Nathan Cayless that grand final lap with his kids?

All that feeling is long gone, meaning the best we can hope for is a weird little asterisk next to our name in the record books, which is why I don’t care about the salary cap scandal.

Melbourne can keep their premiership trophy for all I care.

This ties into my final point – a fundamental part of Australian Rules football is that the existence of a grand final makes that game THE deciding moment in a player’s career.

I will concede that Murphy, in Leather Soul, had this to say about the debate, which very nearly swayed me:

“AFL premierships are always sprinkled with sadness. Forty-four players and 22 spots isn’t a great framework for perfect harmony. The unlucky ones who miss out feel an act they carry with them for the rest of their days. I’m not sure that’s how it should be.”

But I still don’t see how a premiership medal could change that heartbreak. If anything, a permanent memento of that disappointment would surely only enhance it.

The AFL isn’t like the Premier League, which doesn’t have finals, so every single moment of the season is crucial to a team winning the title. It’s not like the NBA, where so few are in a match-day team that it wouldn’t make sense to restrict championship rings to solely them.

Footy culture, for better or for worse, revolves around finishing one’s career with ‘premiership player’ on the CV. It’s why Patrick Dangerfield has a single-minded obsession with winning one, why he has gone on the record in saying he won’t feel ‘fulfilled’ without a flag, and why many pundits argue his status as an all-time great rests (unfairly in my view) on whether he finishes with one.

Changing something so baked into the game and its values isn’t a mere matter of awarding a few extra premiership medals to players who lack the associated experiences to fully cherish them.

It’s a harsh, unfair system, and injustice is an ever-present part of it.

But that’s why it’s going to be so incredibly sweet for the 23 players who step up on the stage at the MCG to receive their premiership medals: they all know just how bloody hard they are to get.

Know The Advantages, Features, And Its Impact On You