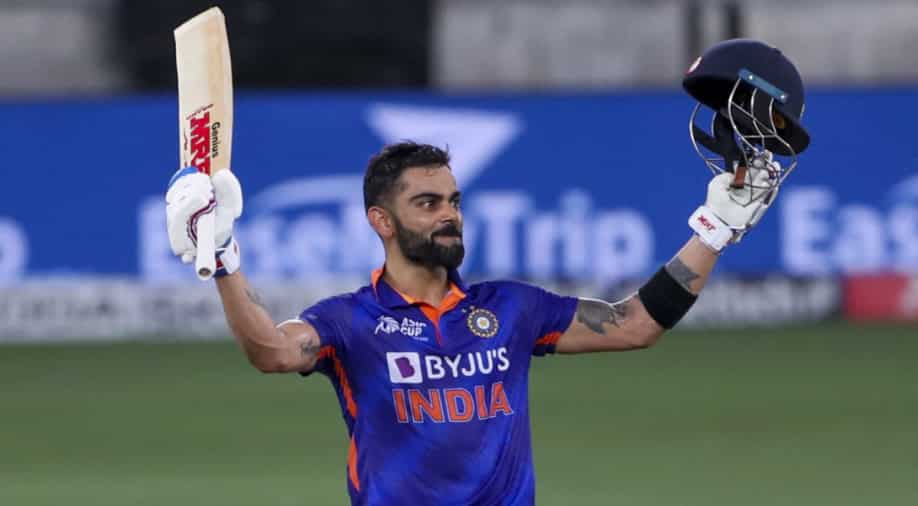 Virat Kohli on Thursday completed 100 sixes in T20I cricket, becoming the second Indian batter to hit a century of sixes and the tenth overall player to achieve this landmark. Virat accomplished this landmark during India`s final Super Four clash against Afghanistan in the ongoing Asia Cup 2022.

Virat finally completed his much-anticipated 71st century. He smashed an unbeaten 122 in just 61 balls with 12 balls and six sixes. Now, Virat has a total of 104 sixes, which in the ninth-highest in T20I cricket. New Zealand`s Martin Guptill has the highest number of sixes in the format, with a total of 172 sixes.

He is followed by Rohit Sharma (171), Chris Gayle of West Indies (124), England`s Eoin Morgan (120) and Australian opener Aaron Finch (117). Coming to the match, Star Indian batter Virat Kohli completed his much-anticipated 71st international century and powered India to a massive 212/2 in their 20 overs during their last Super Four clash against Afghanistan at the ongoing Asia Cup 2022 on Thursday.

Put to bat first by Afghanistan, openers KL Rahul and Virat Kohli got Team India off to a great start. The running between the wickets by the duo was good as usual. Openers really started to open their arms in the third over, with Virat smashing pacers Fazalhaq Farooqi for two fours.

From that point on, KL and Virat feasted on Afghan bowlers. Virat Kohli looked in really good touch and hit spinner Mujeeb ur Rahman for two fours and a six in the sixth over. At the end of six overs and the powerplay, India stood at 52/0, with Virat (25*) and Rahul (26*) unbeaten.

Virat and KL continued their domination over Afghanistan, even after the powerplay. The duo kept the scoreboard running at a good speed. At the end of 10 overs, India stood at 87/0, with Rahul (42*) and Virat (44*). Virat brought up his 33rd half-century in the format with a single.

KL Rahul helped the team cross the 100-run mark with a four in 11.2 overs and scored another four on the next ball to bring up his fifty. Medium-pacer Fareed Malik ended the 119-run stand between the duo in the 13th over, dismissing Rahul for 62 off 41 balls after the batter was caught by Najibullah Zadran at long-on.

Suryakumar Yadav was next and he started his innings with a six on the very first ball, but Fareed got his wicket on the very next ball. Rishabh Pant was up on the crease. He continued to tick the scoreboard with Virat and took India into the final five without further damage. At the end of 15 overs, India was at 134/2, with Pant (6*) and Virat (59*).

ALSO READ: Asia Cup 2022: Massive fire breaks out outside the Dubai International Stadium ahead of India vs Afghanistan

Pant and Virat continued their assault on Afghanistan bowlers. Virat was the aggressor and mercilessly hit boundaries. With two overs to go, Pant-Virat brought up their 50-run stand. Virat also entered into the 90s.

Finally, he completed his much-anticipated 71st international century and his first in T20Is. India finished its innings at 212/2, with Virat Kohli (122*) and Rishabh Pant (20*). Fareed Malik took 2/57 for Afghanistan.